What Are America’s Favorite Seafood Species to Eat? - The Healthy Fish 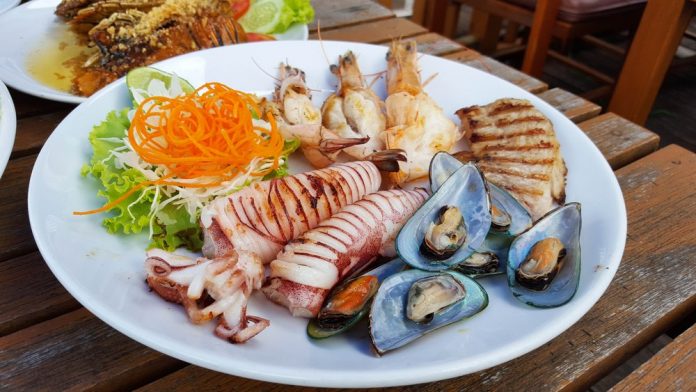 Seafood consumption is on the rise in America, and between the health benefits, nutritional value and delicious taste, it’s not hard to see why. We’ve got the scoop on America’s favorite seafood species so you can see how your favorites match up.

Shrimp is at the top of the list of America’s favorite seafoods. Americans eat a total of 1.27 billion pounds of shrimp a year. That works out to about 4.1 pounds per person.

Why? Shrimp is a popular choice because of its low cost and versatility. It’s a good source of selenium, vitamin B12 and phosphorus.

How? Shrimp is often added to salads or stews, or cooked on kebabs.

The second most popular seafood in America is salmon. Americans eat a total of 918 million pounds per year, or about 2.88 pounds per capita.

Why? Salmon is popular due to its taste and great nutritional content. It’s one of the best sources of omega-3 fatty acids.

How? Salmon is often used in dishes like cedar plank fish and seafood corn chowder.

Why? Tuna is popular due to its low-cost canned form and its protein content. Its texture makes it a favorite among sushi fans.

At a total consumption of 701 million pounds in America, or 2.2 pounds per person, tuna is the third most popular seafood choice.

How? Tuna is a popular choice for use in ceviche and is often eaten raw in Japanese cuisine. It’s also a classic in sandwiches.

A word of caution: Tuna can contain higher amounts of mercury than other fish, so be careful not to rely on it as your only source of fish. This is especially important for children and pregnant women.

Tilapia is the fourth most consumed seafood, and its popularity is on the rise. Americans eat a total 440 million pounds per year, or 1.38 pounds per person.

Why? Tilapia fans love it for its versatility, its low cost and its mild and delicate flavor. It’s also popular for its nutritional value and health benefits. Just one serving of Tilapia has 21 grams of protein and is a good source of potassium, vitamin B12 and vitamin D.

How? Thanks to its versatility, Tilapia can be used in almost any recipe that calls for seafood, including lettuce wraps, tacos and soup. It can also be used as a healthy alternative in recipes that call for chicken.

America loves its seafood, and with such delicious options, it’s not hard to see why. If there’s a type of seafood on this list that you haven’t tried, whip up one of the suggested recipes and enjoy a tasty fish dinner tonight.